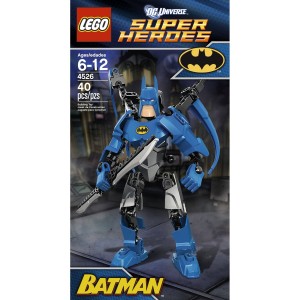 The new Lego SuperHeros sets have your favorite DC Universe Super Heroes like Batman. The Batman Lego set 4526 Ultrabuild features Batman and has 40 pieces. It is recommended for ages 6-12. This is an awesome addition to your Batman lego collection.

With his all-new powered up suit, LEGO Batman uses his detective skills to track down his arch enemy, The Joker. Combine the swords to make the super cool Bat-Sword!

Then power up Batman’s lightning fast martial arts abilities to put The Clown Prince of Crime back behind bars where he belongs!